Pink Ribbon and Mother Teresa’s sari are both trademarks. Although at first sight, trademark law seems to have purely commercial objectives, it is also vital for organisations not intent on making a profit. After all, charities, foundations, non-profit organisations and other charitable institutions have to hold their own in a commercial world. They need to protect themselves against abuse of their names and goodwill, and this, unfortunately, happens more often than you would think.

Fortunately, most charities do make good use of the benefits provided by trademark law. Organisations, like Amnesty International and Greenpeace, but also individuals like Greta Thunberg and Johan Cruyff (the Johan Cruyff Foundation) have all registered their trademarks. The Nice Classification (the official classification for all goods and services for which you can register a trademark) refers to charitable services and charitable goods, such as fund-raising appeals, emergency services or the sale of charity bracelets.

Here are two examples that give us a good idea of the how charity trademarks work in practice: the use of a pink ribbon to help combat breast cancer and Mother Teresa’s sari.

The pink ribbon used to raise awareness of and to support the fight against breast cancer is a well-protected trademark. Fortunately so, as it has featured in several court decisions. In one of the first cases its validity was disputed, the claim being that it was a generally well-known concept, and as such a free mark; a mark that anyone could use for their own profit.

The court did not agree. It was deemed plausible that the brand’s reputation in Benelux was the result of efforts made by the owner of the trademark, Stichting Pink Ribbon (now part of KWF Dutch Cancer Society), and therefore the brand was valid and any use of it by others would constitute trademark infringement.

Later court decisions about Pink Ribbon were mainly about trademark licenses and cooperation agreements. In a recent ruling by the Amsterdam Court of Appeal, you can even read exactly how the use of the Pink Ribbon trademark is specified contractually, the conditions that a manufacturer of charity bracelets must comply with in order to be able to use the Pink Ribbon trademark and how a percentage of the sales proceeds must be paid to Pink Ribbon as the trademark owner. The dispute in this case concerned the settlement at the end of a collaboration. What, for example, was to be done with the 250,000 unsold bracelets and other charity goods? This case gives us a fascinating glimpse into the potential legal aspects of a simple pink ribbon.

Another good example of a charity trademark is the extraordinary trademark of the Missionaries of Charity, the order of Mother Teresa, the poor nun from Kolkata, India who was made a saint. Mother Teresa was best known for her selfless care of the poor, but she was also known by the distinctive blue and white sari she wore. She said that Christ had appeared to her in a vision, asking her to care for the poorest of the poor and dress in a simple robe, just like his mother, Mary.

A white sari bordered by three blue stripes has become the powerful distinguishing mark of Mother Teresa and her order. Because the sari and colour combination were soon being used outside the order for commercial purposes, the order registered the sari as a figurative mark and the border as a stripe mark, both worldwide. To prevent the unauthorised sale of this sari, the order also invoked copyright on it, which in turn gave rise to some interesting legal questions.

Mother Teresa’s sari is undoubtedly one of the most extraordinary charity trademarks, not just because of its divine provenance, but also due to the stark contrast between what it stands for − caring for the world’s poorest people − and why it was necessary to register this trademark in the first place: the concern that others were trying to make money at the expense of these people. This epitomises what all charity trademarks stand for and the problems with which they may be confronted. 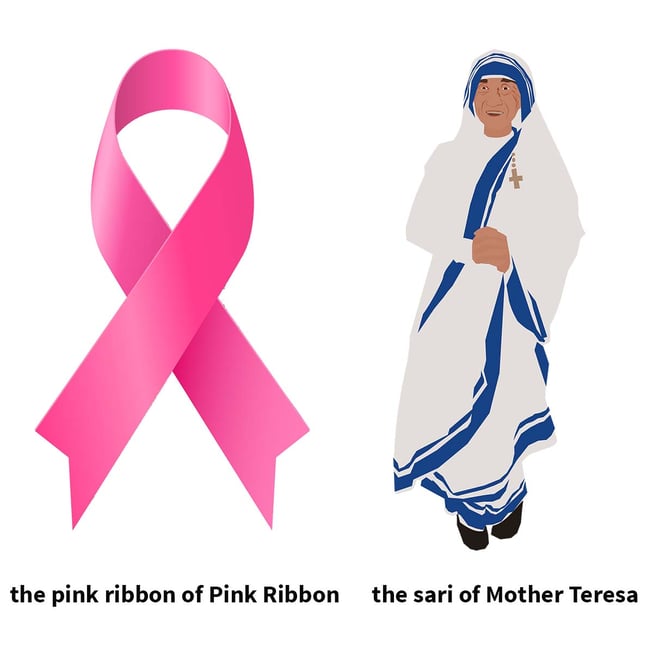