A photo camera that instantly prints out the photo: a concept that is still very successful even more than 40 years after its introduction. We are of course talking about the Polaroid instant photo camera. This camera is world famous. The shape of the photo that comes out of the camera can also be recognized by anyone out of thousands. But is it a valid trademark (the picture of a photo frame is registered as a figurative mark in the European Union).

And then things get exciting: a German man challenged the validity of this figurative mark. His argument was that this figurative mark consists of a simple geometric figure that lacks distinctiveness. He submitted several pieces of evidence of general use of this frame by third parties and also cease and desist letters from Polaroid to Fujifilm invoking the disputed mark.

The trademark owner, PLR IP Holdings (the company behind Polaroid) accused the other party of acting unlawfully. The German man would only be a middle man of Fujifilm who probably has every interest in getting this trademark invalidated.

The EUIPO only looks at the legal dispute, who started the cancellation action is not important. The EUIPO will have to answer two questions: is the figurative mark indeed so usual that it lacks distinctiveness? And the second question, if the first question is answered with "yes": has the trademark in the meantime gained distinctive character so that the trademark is distinctive after all?

The first question is indeed answered in the affirmative by the EUIPO. A trademark must be able to distinguish products and services of a company. A trademark consisting of a very simple shape is not capable of conveying a message to the consumer that the consumer can remember. Thus, this figurative mark is not distinctive.

But has it perhaps become distinctive through use? After all, Polaroid is a world-famous camera. Polaroid has submitted extensive evidence that should show this (including market studies). But the EUIPO is strict: the evidence is mostly based on photos that are in this frame. However, the figurative mark is the frame itself with a white area in the middle. Also, the trademark has not been registered for the product photos. Finally, the market surveys contain questions that are very colored. In conclusion, acquired distinctiveness is lacking. Polaroid is losing its trademark rights on the photo frame. 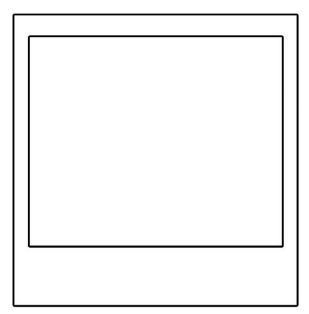