The Very Hungry Caterpillar is nothing compared to Colin & Cuthbert and all their little nieces and nephews. Imagine a chocolate roll, luscious buttercream, a thick layer of chocolate all around, and yet more chocolate on top. Apparently this is what a caterpillar looks like if it grows up in the sweets and cakes section of a British supermarket.

Family members often resemble each other, of course, especially in caterpillar families, and normally this is not a source of frustration or conflict. Unfortunately, this was not the case for our cake caterpillars (erucae crustularum).

In April 2021 Aldi’s Cuthbert the Caterpillar received a letter from Marks & Spencer’s lawyers. His family resemblance to their Colin the Caterpillar was too strong and in violation of Colin’s copyrights and trademark rights. Aldi took a good look around, saw all the other caterpillar confections and launched the twitter-hashtag #freecuthbert. The Cake War had begun.

Marks & Spencer initiated proceedings at the English High Court. Aldi tried to take a different approach to the conflict, by using humour. This is not just any court case, this is…#freecuthbert, they wrote in a parody of Marks & Spencer’s famous slogan, followed by memes of Cuthbert behind bars, Cuthbert with a copy of ‘Patents, Copyrights & Trademarks for Dummies’, etc. In no time, they were trending on Twitter and had unleashed a flood of reactions, new videos and memes.

For a while, Cuthbert was nowhere to be seen, but it wasn’t long before he was back on the shelves in a limited edition. He hadn’t quite pupated yet, but he did look somewhat different. His eyes were no longer made of brown but white chocolate. And profits from his sales were to go to charity. ‘Let’s collect money for charity, not for lawyers’, tweeted Aldi to Marks & Spencer, followed by ‘Can’t Colin and Cuthbert be besties?’

More letters followed from more lawyers. Then all of a sudden, there was silence. It appears that the two parties have made peace. The exact details of the settlement are unknown, but a spokesperson for Marks & Spencer reported that they were very satisfied. Aldi’s response was in a slightly different tone of voice: ‘Cuthbert is free and is looking forward to seeing all his fans again soon.’ 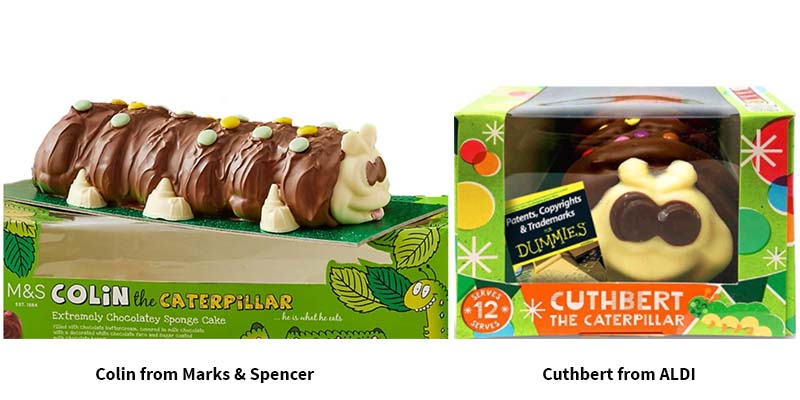