"It’s not class or ideology / colour creed or roots / the only thing that unites us / is Doctor Martens boots / hey." (Alexei Sayle in The Young Ones, 1982)

In summary proceedings, the District Court of The Hague ruled this February that the typical yellow stitching in the welt of the famous Dr. Martens boots is a valid trademark. And that shoe store Van Haren is infringing that mark with its own brand of lace-up boots with a similar stitching. More precisely: is infringing that position mark, because that is how the yellow stitching of the Dr. Martens is registered in the trademark register.

The legal term position mark is relatively new, but what it refers to is at least as old as the red tab on the back pocket of a pair of Levi's jeans. A position mark consists of "the specific way in which the mark is placed on or affixed to the product.” A certain element on a product that is typical for a specific brand. Like the red tab of Levi's, the red sole of Louboutin or the yellow stitching of Dr. Martens.

But not every element can be a valid trademark. Exceptions apply. The eye-catching red dot on Tefal’s cooking appliances, for example, could not be registered as a trademark, because consumers were said to perceive it as a technical feature, a heat indicator, and not as an indicator of origin, a trademark.

But, as the court ruled in this shoe case, the yellow stitching of Dr. Martens certainly does possess its own distinctive character and does constitute a valid trademark. Moreover, a large number of articles and publications show that the public considers the yellow stitching to be very characteristic of Dr. Martens. "The typical yellow stitching" wrote Elle, for example, and "instantly recognizable" reported a major dutch newspaper. In this light, confusion was deemed likely and infringement by Van Haren by means of its own similarly stitched lace-up boots was established.

The position mark is a special kind of trademark. Special for those interested in trademark law and in this case especially special for those who love their Dr. Martens, the only thing that unites us. 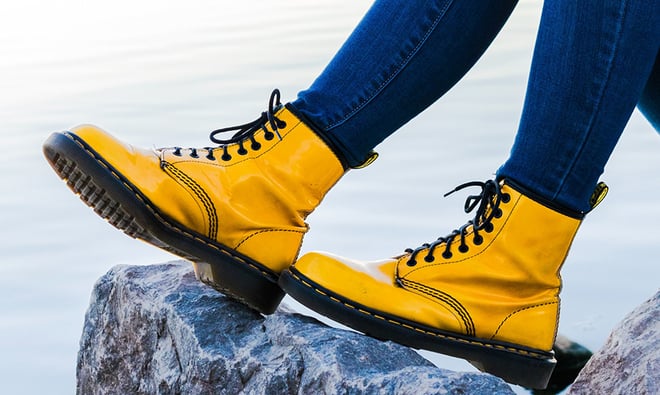